A refined machinery for creative development within fashion, food and media.

A house is a member’s house where solopreneurs and larger corporations work side by side. Constantly fueled by programming with talks, seminars and events. The location, a brutalist icon in the very center of Stockholm, helped refine the concept of bringing work closer to life. Already when it was built, in 1969, the A house building was a pivotal architectural example for how to generate sharing, dialogue, innovation and production. When the building was inaugurated in 1969 it was brutally criticized, and has since been voted the ugliest building in Stockholm numerous times.

A house is recycling and reinventing the radical brutalist ideas that were the foundation of the former Architect school in Stockholm.

It is an alien in its urban context – The purpose of the building was to be a machine, not for living (as Le Corbusier famously launched), but to educate architects to cover the needs for the accelerating urbanization in Sweden around 1970. When, in 2015, the Architect school moved out, the strategy for transforming the building was simply to use the existing – the architecture and design, the radical ideas of democracy and transparency, the location in the city – and to update these values to our times, rediscovering the building and its radical heritage.

The owner of the building, Akademiska Hus AB, is Sweden’s second biggest real estate owner, and a special one, owning almost 70% of buildings used for academic purposes in Sweden. Akademiska Hus AB have a state commission to develop ”innovation environments”. With the former Architect school the company saw a possibility to create a prototype for innovation environments.

A house is carefully curated to take shape as a “machine for innovation” and to use the unique qualities of the building itself and the close relationship to Academia through the owner. A house’s starting point is that innovation today is a matter of dialogue, networks and interdisciplinary connections. A house is therefore connecting carefully selected partners – smaller companies, solopreneurs and creatives – to collaborate, where researchers from academia and expertise from larger corporations are commonly invited.

The focus is to develop – all according to the radical ideas that once built the building – the basic human needs – food, shelter and clothing, adding community to mark that an obvious starting point today has to be that the world has become digitalized.

A workclub – Creators and entrepreneurs – the coming and the established side by side – within fashion food, media, cities and design can apply for our membership in our work club. Here they are given a unique chance to meet, work, connect to develop business and new content.

A labs – By adding a public retail lab, a kitchen lab and a prototype lab, all with selected partners – tools are provided to generate collaborative processes and innovation.

A hall – By inviting Habiter Autrement/Mia Hägg to design a new 1.000 sqm stage A house will be able to host the entire eco-system: from development and innovation to business and knowledge and further on to launch ideas publicly through summits, workshops and festivals. At the same time A house that used to be described as a closed fortress will open itself to the city and its inhabitants.

A production –  Floor 0 is dedicated to production units within food and beverage, in order to supply local produce to the house.

A food – Starting with MR Cake that opened in September 2017, A house will gradually open restaurants and bars to the public and to the members of A house. 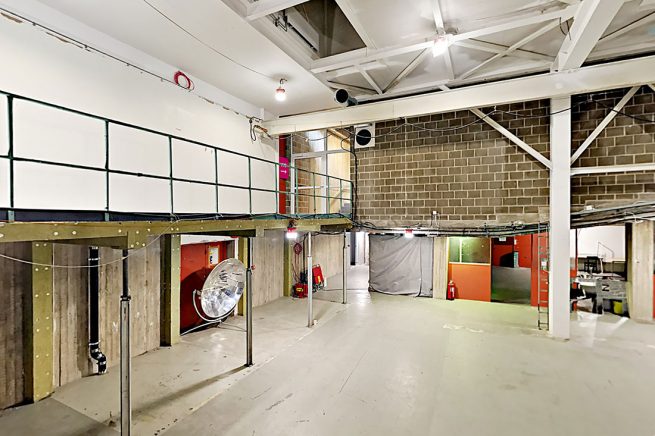